Perspective: What’s Up With TEFCA?

It sounds straight-forward. Physicians and other healthcare stakeholders want to exchange health information electronically with various stakeholders around the country. Can it be done? Perhaps, but with a lot of behind-the-scenes transfer of the information using one or more direct interfaces, health information networks (HINs), and/or health information exchanges (HIEs), some of which have attempted a more national scope but still fall short of what’s needed. And there’s the potential for many roadblocks along the way because those entities operate with varying business models, technical requirements, consent models, and geographic market areas, not to mention the fact that not all connect with each other.

In short, currently there is no seamless way to share medical records and patient data on a national scale. That’s the problem ostensibly that TEFCA -- the Trusted Exchange Framework and Common Agreement -- is trying to address. As called for by the 21st Century Cures Act of 2016, the Office of the National Coordinator for Health Information Technology (ONC) and their chosen (and funded) Recognized Coordinating Entity (RCE), The Sequoia Project, are fleshing out the details and scope of TEFCA albeit in fits and starts. The first set of final agreements and accompanying technical, operational and business requirements are expected to be rolled out in the first quarter of 2022 (and maybe as early as January).

Here’s my perspective on where TEFCA has been and where it is likely to go.

How TEFCA Is Expected to Work 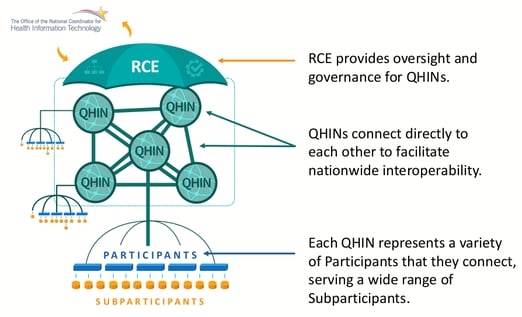 TEFCA is a set of contracts, policies, and standards to support the development, governance, and operation of a national system that offers secure, electronic health data exchange. The goal is to create a single “on-ramp” for any healthcare entity (including individuals) to the numerous health information networks and exchanges that exist (and may come online in the future) and exchange information with any other entity that is also connected within the boundaries of certain exchange purposes. TEFCA emphasizes access, scalability, transparency, privacy and security, including identity proofing and authentication. The Common Agreement is the contract for the basic legal and technical requirements supporting standardized, trusted exchange among participants.

TEFCA establishes a backbone of connected super nodes, called “Qualified Health Information Networks” (QHINs), which other HINs, HIEs, healthcare organizations or even individuals will connect to (either directly as participants, or connected to participants as sub-participants). QHINs will operate in a standardized way to enable interoperability, security and connectivity. Details are spelled out in the QHIN Technical Framework (QTF), which describes the functional, technical, and operational requirements that organizations must meet to become a QHIN. QHINs will begin to launch later in 2022 and will roll out (perhaps in waves) as QHIN applicants complete the approval process.

So far, a handful of organizations (most already operating exchanges at scale) are expected to become QHINs (out of the hundreds that exist) or to at least have a major seat at the TEFCA governance table. They include:

Other organizations, such as large state HIEs (some of which are banding together), organizations with experience running and advancing HIEs (e.g., Velatura/USQHIN), health IT interoperability vendors (e.g., Health Gorilla), and large EHR vendors (e.g., Epic), have either announced, hinted, or seem likely to attempt to become QHINS. The language regarding eligibility to apply is formulated to provide a clear path forward to existing national exchange efforts, and will provide some challenges for newer entrants, so it will be interesting to see how broadly it is interpreted and how many QHINs will be approved.

As mentioned previously, the first of TEFCA’s final documents are due to be published as early as January 2022 (just a few short weeks away). Draft versions of different components of TEFCA have been issued since 2019, with many opportunities for public response. Sequoia has also held closed door discussions with a few dozen organizations that participated in the Common Agreement Workgroup (CAWG) with interest and means to become QHINs. One of the latest releases to the public came in September 2021, with a document entitled Elements of the Common Agreement. It was somewhat of a disappointment because it really was a table of contents for the upcoming TEFCA specifications instead of the actual proposed contract language and details. It really didn’t provide much insight unless one wanted to read between the lines. It did, however, provide the opportunity for ONC to ask for public comment. Not surprisingly, it garnered responses from many (four dozen) significant stakeholders, many asking for clarifications and expressing concerns for their particular interests. A supplementary document, the Draft Qualified Health Information Network Eligibility Criteria, was issued in early October, also with a brief public comment period. The comment period for both documents has closed. Comments are posted on the Sequoia website; they offer a glimpse of what stakeholders (particularly the “Big Dogs”) think the final versions should contain. The RCE continues to hold forums for stakeholders to provide feedback.

To be sure, TEFCA is a work in progress and many issues are outstanding. Some may be addressed in the forthcoming final TEFCA guidance. Others may be resolved in the longer term, likely in phases. Here are some big concerns that complicate TEFCA’s rollouts.

On the other hand, there are some standards and technologies that will be needed for TEFCA but are not yet ready for prime time, and it is unclear to what degree they might be included within TEFCA vs relied on outside of TEFCA. These include patient matching, eConsents and creation of a patient directory.  However, this is handled (e.g., centralized, federated, hybrid) will be essential for QHINs to accurately identify patients; take varying levels of consent into account (for example, a patient could share certain data with a mental health provider and deny access to that information to other providers); and accurately route the information.

There’s also the potential for capacity gaps. Scalability will be important. Can networks scale up fast enough to meet demand? Will the demand be there? What happens if one group of connected networks emerges as the most efficient? Users may flock to it and make it the preferred way to route health information across the country. Will there be enough capacity to handle such a flood of users? Would it drive other networks out of business?

Although TEFCA may have some traction with non-for-profit entities, it will have the most success if it can find a way to also support for-profit business models. How those shake out remains to be seen in terms of size, user fees, membership, market share and sustainability. There also are questions about how much consumer participation will materialize. One of the major concerns with 21st Century Cures was that if once consumers gave consent for a third party to request data on their behalf, it made too much information available to organizations outside of HIPAA protections. TEFCA, as currently formulated, requires HIPAA-type protections to all data it exchanges.

In the meantime, the government has ways of making its “voluntary” requirements mandatory in certain circumstances, which in turn would flow down to the private sector. For example, connecting with a QHIN could be a condition of participation for Medicare, Part D plans and Medicaid. As Medicare goes, so goes the private sector.

Looking forward. TEFCA is an evolving program that is seeing renewed focus in today’s rapidly changing healthcare landscape. Point-of-Care Partners has helped many payers, providers and vendors understand how such initiatives as TEFCA affect their lines of business, technologies and market share. Let us put our expertise to work for you. Reach out to me at ken.kleinberg@pocp.com.