Will Sweeping Proposed Changes to Stark Laws and Antikickback Statutes Leave Pharma Manufacturers, Pharmacies, and PBMs out of the Definition and Protection of Value-Based Entities?

The far-reaching federal reform changes by CMS to the Stark Laws and by HHS-OIG (Office of Inspector General) to the Antikickback Statutes (AKS) to help promote value-based care have probably made it onto your radar. These changes, as part of the HHS Regulatory Sprint to Coordinated Care, (see https://www.hhs.gov/about/news/2019/10/09/hhs-proposes-stark-law-anti-kickback-statute-reforms.html) have been long-awaited by providers. Finalizing and adjusting to them will be complex for the industry. What will be welcome are the benefits of improved data sharing, analytics, coordination, and security. However, important protections must remain, especially considering most reimbursement is still volume-based. Pharma and medical device organizations should be particularly concerned with the potential of being excluded from the definition and therefore the protections of value-based entities (VBEs).

In an October 9 press release, the Department of Health and Human Services (HHS) conveyed the proposed changes “would be an unprecedented opportunity for providers to work together to deliver the kind of high-value, coordinated care that patients deserve.”

The Stark Law changes would permit physicians and other healthcare providers to design and establish value-based arrangements without fear that legitimate activities to coordinate and improve the quality of care for patients and lower costs would violate the Stark Law.

The Federal Anti-Kickback Statute proposed changes would support outcome-based payment arrangements that reward improvements in patient health. In addition, physicians and other healthcare providers would be given safe harbor protections for “certain coordinated care and associated value-based arrangements between or among clinicians, providers, suppliers, and others that squarely meet all safe harbor conditions.”

Stark Laws and AKS are designed to work together to limit cost and corruption with federal health care programs.

The Rise of EMRs and Donations

This major reform is big news. Over their three decades on the books, they’ve undergone a convoluted progression. Healthcare has increasingly become IT-enabled. During the rise of EMRs, and especially after the passage of Meaningful Use Program in 2009, hospitals were prepared to donate ePrescribing and EMRs to smaller community providers to gain access to better data and to strengthen relationships. Exceptions to Stark and AKS were made to accommodate and encourage this.

To say that these laws and statutes were complex was an understatement. One of the biggest challenges was ensuring that technology donations were not tied to referral volume or value. One pioneer healthcare provider hired three attorney teams to work on it, stating they wanted to be “the first to succeed,” not “the first to go to jail.” Attorneys for many vendor organizations had a different view, with one stating they could “drive a tracker trailer thru Stark.” Over time balance was found, and the number of successful organizations increased. When the donation rules were scheduled to sunset the end of 2013, most providers (and their attorneys) were relieved to have the 2021 extension.

As VBC adoption has increased, some unintended consequences of these laws and statutes have started to surface. The abuse-prevention intention began to become a barrier to the cross-organizational collaborations necessary to solve industry issues and improve outcomes because of the fear of fines and worse. As the government developed a plethora of new alternative payment models, the challenges increased. Limited waivers, used for Medicare Shared Savings Programs (MSSPs) and ACOs, were not scalable.

Reform Now – But How?

Two powerful forces, the VBC movement and the current administration’s focus on burden and regulatory reduction, converged and led to these significant proposals (and their hundreds of pages). Organizations with the appetite to take on the highest level of value-based risk, will have the highest levels of protection. Organizations only willing to take on some or no downside risk will be offered the least exceptions and safe harbors.

The government is also focused on these other major considerations:

One highly welcome area of modification where most everyone will agree is where larger or more sophisticated organizations with EHR capabilities and expertise in cyber security can help smaller organizations that are struggling and vulnerable. 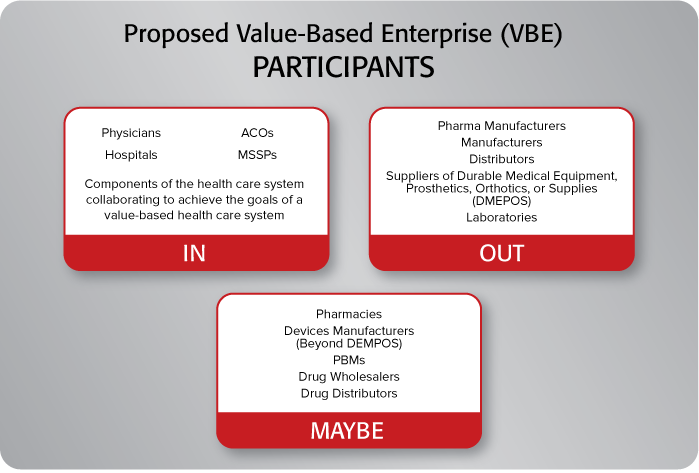 There are some major areas are of interest to pharma and medical device stakeholders. The biggest surrounds which types of entities included under the definition of a value-based entity. Currently the proposals exclude: pharma manufacturers, manufacturers, distributors, suppliers of durable medical equipment, prosthetics, orthotics, or supplies (DMEPOS), and laboratories. There is also consideration for excluding pharmacies, devices manufacturers (beyond DMEPOS), PBMs, drug wholesalers and distributors. With fairness to regulators, pharma and device companies have historically been excluded from these types of protections with OIG pointing to the potential for fraud and abuse since they are heavily dependent on prescriptions and referrals. HHS Secretary Alex Azar stated that future rulemaking for pharma is in the works, but timeframes are uncertain and will undoubtedly be tied to success with these proposed revisions.

But consider all the beneficial synergies and collaboration that are possible. Entities that want to provide the highest levels of value need to consider working closely and in partnership with labs, radiology groups, care managers, hospital and retail/community pharmacies, medical device companies, MTM service providers, telehealth and remote monitoring companies, long-term care providers, payers, etc. Drug manufacturers and their hub services provide a highly valuable service when it comes to powerful (and often expensive) specialty meds. However, manufacturers advising patients without the requisite medical expertise (example: pressing patients to adhere even though they are experiencing difficult side effects) are just some of the areas to be concerned with.

On a highly positive note, there are some new AKS safe harbors proposed around patient engagement – including protection in furnishing tools and support to patients to improve health outcomes, quality, and efficiency. There is also a request for feedback on the value of price transparency – will knowing how much a therapy or service costs influence whether it will be suggested or accepted? Recognition that patient preference, physician judgement, and payer receptivity also play a role in what is ordered are being considered (“the patient made me do it”).

Some parts of the proposals are complicated, such as the chain of relationships and exceptions possible with indirect compensation which does not involve a direct transaction between provider and payer. Many stakeholders have also been pressing OIG for safe harbors for warrantees with bundled payments – the concern is whether a payment to a provider if outcomes or performance targets are not met constitutes unlawful payment.

Lots to Consider and Action to Take

Whether one is looking for a relaxation of enforcement, regulation and burden reduction, or a rewrite to promote progress in VBC, there is a tremendous number of issues to consider here.

In terms of action to take, recognize that regulation often significantly lags technology, but once regulation is finalized, it can often outrun culture and an organization’s ability to respond. Better to be actively in the loop rather than be the catchup victim. What the feds do here will influence the commercial sector, so the stakes are high. The time is right for an overhaul and this is a major step forward with huge implications for the success of VBC. The deadline for comments is Dec 31st. POCP is happy to work with stakeholders as they formulate their comments.